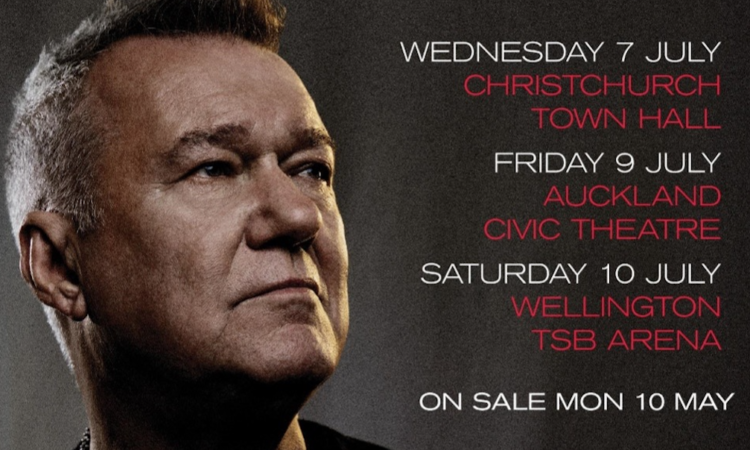 The borders are open and our favourite Aussie is coming back!

It would take more than a mere global pandemic to stop Jimmy Barnes. While most of us spent 2020 bingewatching TV shows, Jimmy and his wife Jane entertained the world with daily ‘at home’ performances that attracted more than 100 million views on social media. The Australian rock icon also used 2020’s COVID lockdowns to learn the bagpipes, release a non-fiction book, start work on a novel and help Jane create a forthcoming recipe collection. Plus he somehow found time to write and record a new album with his loved ones that’s aptly titled, Flesh And Blood

Flesh And Blood will be released on 2 July and is the twentieth studio album by Jimmy Barnes. Less than a week after release, Jimmy will be bringing his eight piece band made up mostly of his family to New Zealand for a three date tour.

Beginning at the newly refurbished Christchurch Town Hall on Wed 7 July, then playing the iconic Civic in Auckland on Fri 9 July before wrapping up with a bang at Wellington’s TSB Arena on Saturday 10th July, this will be the first international dates Jimmy has played since the beginning of 2020.

“It’s great to be back playing live again”, says Jimmy. “It was good to get some downtime at home for a change but now we’re hungry to get back onstage together. If 2020 taught me anything it’s that Facebook and YouTube videos can be fun but they’re no substitute for a real gig.”

The ten songs on Flesh And Blood feature multiple contributions from Jimmy’s extended family. His son Jackie plays drums, his daughters Mahalia, Eliza-Jane and Elly-May all contribute vocals, as does Jackie and granddaughter, Tyra Harrison.  His son-in-law, Ben Rodgers, engineered the album, played bass and collaborated with Jimmy’s nephew, renowned photographer Jesse Lizotte, on the album cover, plus he and Jane also duet together on the American classic Love Hurts.

“I realise lots of people have struggled badly during the last year but I’ve been able to stop and count my blessings”, Jimmy explains. “Jane and I have been married for four decades but I’ve basically always been on the road so this was literally the first time we’ve ever spent so many months at home. It made me realize how lucky I am to be surrounded by our big musical family. As you can tell from all those songs we posted online we really like to sing with each other, so making an album with lots of the people I love felt like a natural way to help us pass this time together.”

The introspective lyrics on most of the new material clearly flows from their creation ‘at home’ during a difficult time and according to Jimmy the album’s creation took a few surprising twists. Initially the plan was re-record some of the acoustic cover versions by ‘The Jane Barnes Band’ that had struck the biggest chords on social media. However, only two of those songs made the final cut (Tennessee Waltz and Love Hurts) because Jimmy and his brother in law, Diesel, got on a roll and ended up co-writing six tracks including the one that gave the album its title. Jackie and Jane each also co-wrote a tune (I Move Slow and Around In Circles respectively) while Cold Chisel ‘brother’, Don Walker, contributed a stark ballad called The Truth. One way or another, it was a family affair.

The sound of Flesh And Blood also took an unexpected turn once the band headed into the studio.

Barnes said, “Back in the 90’s I made an ‘unplugged’ album called “Flesh and Wood”. We started out planning to create a sequel to that but we ended up mainly using electric guitars just because they suited most of the songs. Also my producer, Kevin Shirley, kept encouraging us to add some more rock energy and we didn’t need much of a nudge given that everyone had so much pent up energy from being locked down. I guess that’s why I’ve ended up making one of my most ‘live sounding’ records in a year when there were hardly any real gigs to play.”

Jimmy debuted the title track from Flesh And Blood at the State Memorial Service for his close mate, Michael Gudinski: “Michael’s loss really hit us hard. Everything he did was about family one way or another which is probably why he liked that song (Flesh and Blood) so much. I’m dedicating this record to his memory.”

Appropriately the deluxe CD of the album will include a bonus DVD featuring ten of the most popular ‘at home performances’ that were the initial inspiration for this release. Bearing the tongue in cheek title, The Jane Barnes Band’s Greatest Hits, this limited version will be an additional souvenir of a year that won’t be forgotten in a hurry.

Flesh And Blood will be released on 2 July and is the twentieth studio album by Jimmy Barnes. In his homeland of Australia, he has enjoyed twelve solo chart toppers plus five with Cold Chisel taking his career tally to a record setting total of seventeen #1 albums.

Presented by Eccles Entertainment, The Rock, The Sound & The Breeze

ALL SHOWS ALL AGES

Gateway To Your Heart

‘Til The Next Time

End Of The Road