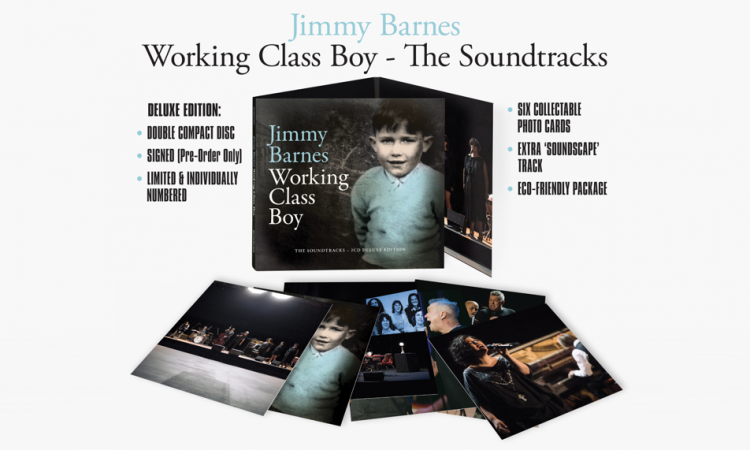 Jimmy Barnes’ life story is now a powerful film, and to celebrate Bloodlines are proud to announce Working Class Boy – The Soundtracks, to be released 17 August 2018.

Album 1 contains 12 songs, 2 instrumentals, and 13 spoken word pieces. It is an intimate and raw set of performances captured live at the State Theatre on April 12 last year. Jimmy is joined on-stage for a number of powerful collaborations including those with daughter Mahalia, son David, and brother in law Diesel as his brings his childhood story to life.

Album 2 is a state-of-the-art recording of 8 songs created live with a full band on a Soundstage for the movie version of Working Class Boy. It includes a truly memorable collaboration with Richard Tognetti and the Australian Chamber Orchestra on the Randy Newman song ‘Texas Girl At the Funeral of Her Father’.

Working Class Boy – The Soundtracks will land on Friday August 17 and a full track listing can be viewed below.

Jimmy Barnes needs no introduction. After 40 years on stages of all kinds, Jimmy is an icon – his nickname “Barnesy” conjures up thoughts of rock music at an ear-splitting volume, and of soul standards given a unique reading. Jimmy has been through it all, and lived to tell the tale which has earned him a place in Australia’s heart and heartland. Along the way he has sold more records in Australia than any other domestic rock & roll artist, and has had more #1 albums here than anyone else, including The Beatles!

In 2016, Jimmy finally told his tale in the autobiography, Working Class Boy, which was a #1 bestseller and won the Australian Book Industry Award (ABIA) for ‘Biography of the Year’.

And as the book was being read right across the country, Jimmy also announced his first ever ‘spoken word’ tour. Working Class Boy: An Evening of Stories & Songs saw Jimmy leaving behind the arenas and rock gigs where he’s blazed a trail for decades, instead telling his life story for the first time on theatre stages right across Australia.

“Just like the book, this live show tells the story of an imperfect childhood that has led to me becoming an imperfect adult”, said Jimmy.

“I spent most of my life running from my childhood and now it seems like my time to face it. So this is the story of a lifetime spent running away. Running from fear, running from shame, but at the same time running from hope. I’m not running anymore”.

As the man himself explains near the start of the film, “I was born James Dixon Swan. This is the story of how I became Jimmy Barnes.”

Jimmy’s honesty and inimitable sense of humour create an emotional and compelling film of a damaged childhood, a broken family, a search for love and, finally, a genuine redemption. The documentary also features some captivating musical moments, now brought together on this extraordinary Soundtrack package.